Not everything I represent is quite as heavy as what I’m about to share. But I feel it shows you one important part of my makeup. See if it speaks to you on any level:

This was one of my earliest and most fulfilling wins…and I hadn’t even seen it coming.

In 2009, I was part of something I mentioned in Episode 32: My Search For Purpose Draws Harmful People To Me.

My quasi-business partner at that time was a fairly self destructive egomaniac.

But he drew a good man our way: the artist Philip Lekki.

Philip (1949-2017) had been a combat medic with the Air Force in the Viet Nam War. He experienced traumas no one should ever have to endure. The stuff of nightmares.

This, in part, drove him into bipolar disorder, as well as many other soul destroying realities.

His life, post war, was one of never ending horror.

He knew I’d written a book about my own 8-year battle with bipolar as a Marine Gulf War vet.

So we dug into the shit from our unfortunately related pasts.

I’m not free to share all he shared with me. But the day we talked, I wasn’t there as a professional. We were just two vets talking.

I thought it went well.

After the fact, he told me that I’d been the first person, in over 30 years, who understood what he’d been trying to say all that time since the war.

No one got him.

It was beyond powerful for us both.

Later, he gifted me the charcoal drawing below of “God rescuing him from Hell.” He gave it to me at the opening of an art gallery I’d helped create, in which he was the featured artist.

This was years before I learned all I have since, and became the man I am today.

But in that moment, I knew I was on to something larger than myself. And I had to get to the bottom of it if I were to ever live a fulfilling life.

My intense search for this deeper self awareness has led to you meeting me now.

That moment with Phil changed me. And I’m forever grateful and honored that he let me in like he did.

I hadn’t been looking for anything from him that day, except an interesting conversation.

Turns out, these conversations are at the heart of all I care to do. 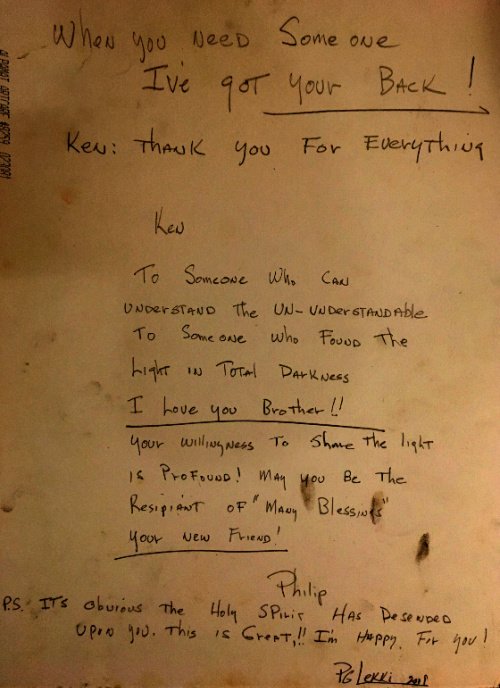 P.S. I only found out that Phil had passed while writing this page.

We weren’t close. I only saw him one other time after our talk. But I miss him.

It hurt to discover the news this way. But I’m SO glad we had our talk.

And I’ll never sell that drawing.